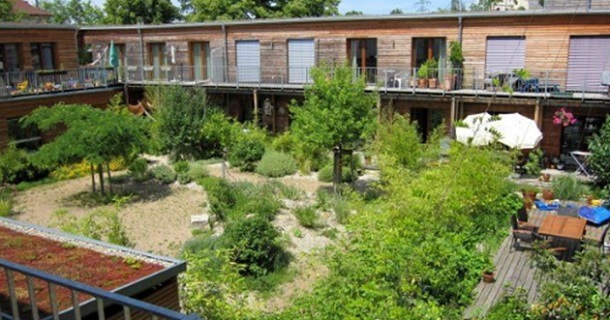 Climate change prevention and mitigation in the Green City Freiburg

Astrid Mayer is a journalist and book author, and a specialist for educational programms about sustainable development. Her agency "Freiburg Future Lab" is partner of the Green City Freiburg.
The fact that Freiburg has a climate protection plan since the late 80s and put down CO2-emissions by 33% doesn't spare the region of increasing temperatures due to climate crisis. In the Rhine Valley (where Freiburg is situated), average temperature has risen 2°C already (compared to medium temperature 30 years ago). The forrests undergo dramatic changes in the last five years, as the caracteristic Black Forrest fur trees are massively damaged by increasing heat and lack of rain in summer time.
The number of "tropical nights" is predicted to increase drastically, in a city where air conditioning / cooling is only provided in office buildings so far.
In this situation, adaptation of the city is crucial. Buildings and public space have to be changed and planned differently. In 2018, the city elaborated a detailled plan of the micro-climatic situations in the different districts and in different building types. It is now one of the bases for further city planning. Measures are taken in the built environment: Rain water use, planting more trees and new species as the ancient species can't stand the climate any more, open impermeabilized soil and green it. Improve cooling possibilities for buildings and blocks in order to minimize energy use for cooling.
The new eco-district, planned for 15.000 new inhabitants, will not only be zero emission but also adapted to the increasing heat: Soil has to be permeable to a maximum (no underground garages), rain water management changes, wind corridors are provided.
Astrid will present measures and the structures in the city that support these measures.